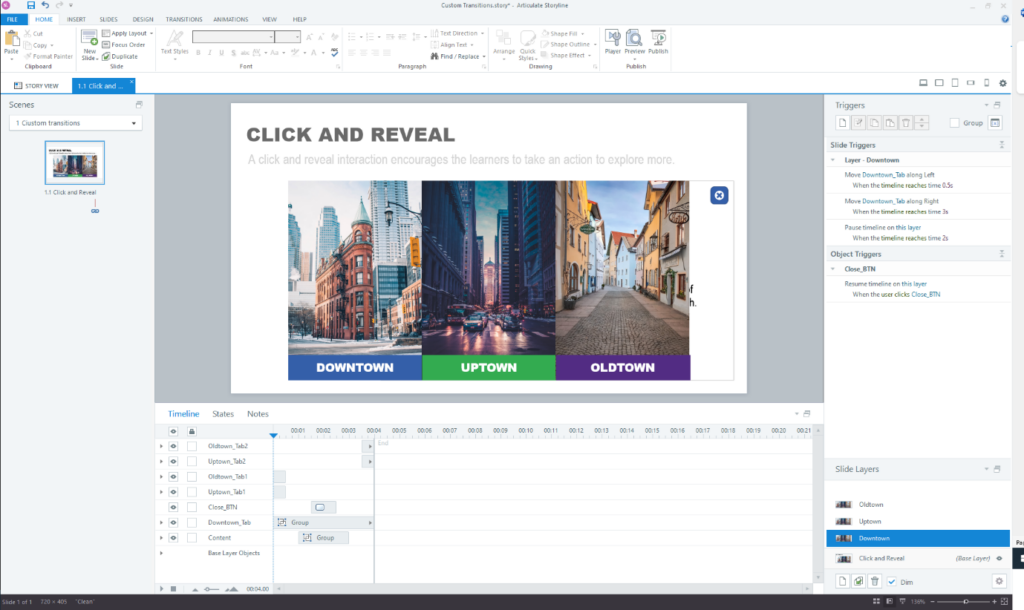 Animations and transitions are great ways to make your learning come alive. Click and reveal interactions are a staple of eLearning design. They encourage the learner to take an action (click, hover, drag and drop) to reveal further information. There’s nothing wrong with a static click and reveal, but you can make it more dynamic and interesting by easily adding some motion and animation in your Articulate Storyline courses.

Have a look at this example:

Now from a learning point of view, there is nothing wrong with this interaction. The learners clicks on the information they are interested in reviewing and it appears. But by adding some motion paths and animations, you can create a much more interesting and dynamic effect.

Looks better doesn’t it? All we’ve done is duplicated the base layer, and then on the duplicated layer we’ve added some entrance/exit animations and a couple of motion paths to the tabs and the content container. We’ve worked out at which time on the timeline each animation completes, before we start the next one. This means as the layer starts it will run the animations in order, providing the experience that everything is moving in turn to its new position. Once the content is on screen for the learner to review it, a trigger pauses the timeline so they can spend as long as they need to work through the content.

When the learner is ready, they click the close button, but rather then it just hiding the layer, it resumes the timeline on the player which then uses animations and motion paths to move everything back to its starting positions. To complete the effect, we set the slide properties to Hide slide layer when timeline finishes and when revisiting to Reset to initial state. This will close the slide layer automatically once all the items are back in their starting positions and ensure the slide resets all of the animations if they revisit the layer a second time, playing everything from the beginning again. You can use this technique on a wide range of slides. For example, to create a motion graphics effect.

The key to a good effect is to keep in mind your start and end states. The rest is working out how to get back and forwards between the two using entrance/exit animations, motion paths, and even covering/uncovering parts of your content with shapes the same colour as your background – a little technique ‘cheat’ to make items ‘disappear’ on screen by hiding them behind other objects.

If you want to learn more about using animations and transitions you may be interested in our Certified Articulate Storyline Training.  Find out about it here.